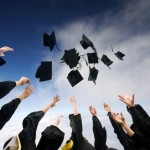 My son just graduated from Temple University’s School of Media and Communication.  Dan Rather was the commencement speaker.  He offered simple advice to the 535 graduates as they as they began their careers.  He told them to listen.

He realized the irony in the advice.  These students were communicators.  They were receiving degrees in Advertising, Journalism, Media Studies & Production, and Strategic Communication.  They were ready to go out and broadcast messages to the masses…and he was telling them to listen.

Listening is vital.  We need to listen to what other people are saying, and what they are asking us for, before we start talking.

He told a story about Walter Cronkite.  (Please note: I am paraphrasing this story, and not telling it half as well as Mr. Rather!)  When Walter (he called him Walter) was out in public, people would often approach him.   They would ask him questions about his career; what were the big moments, which were the most vivid memories, and who did he admire?

Walter became hard of hearing in his later years.  When people came up to him, he would graciously shake hands and answer their questions.  Sometimes he didn’t hear very clearly.  A man in a store asked him a question if he knew so-and-so.  He answered “I’ve met him, but I don’t know him well.  I hear he’s a great fellow.”

Later Walter’s wife Betsy pulled him aside and asked if he had heard clearly.  Did he hear who the man asked about?  Walter admitted that he hadn’t heard. Betsy said she didn’t think so, since the man had asked Walter if he knew Jesus. “I hear he’s a great fellow, ” Walter had replied!

We agree with Mr. Rather.  Listen and understand.  It was great advice for the graduates and for everyone else in the audience.

Listening is one of our biggest strengths at CareLink. We listen to our clients to make sure that we understand their practice needs.

« Overpriced $0.25 Coffee?
Are you Speaking the Same Language? »